With the release of some new Adeptus Titanicus kit I thought that it was time to look at reinforcing the Legios. The boxed sets are proper bargains and I wanted to keep both factions matched in terms of forces.

So once this lot is built we should have

Also bought some of the Forgeworld Legio Gryphonicus decals. Some of these tend to have short production runs so snapped up two sets whilst they were available.

So the two Legios and their support Knight Houses lined up for battle again in an urban Sector Imperialis environment.

First game of Adeptus Titanicus in months, but tried to play it “more properly” with the kids, selecting the Retrieval mission out o the main rule book.

Legio Ulricon’s Warhound picked up the stranded Titan crew from the central objective but took titanic damage being immobilised before being destroyed.

The rescued crew were relayed onto the Warlord that strode up to collect.

Victory to the Traitors! Tried the Arioch Claws and Sunfury Plasma weaponry in this game, maybe get the Quake cannons and Warp Missiles out next time!

Last game of the year with `Christmas just around the corner. 2019 has been a good hobby gaming year! Final news is sight of an early Christmas present, more titan weaponry and some of the new scenery for the industrial war zone that I am building.

So this one has been on the painting table for a while, but is at that kind of near finished state now. I don’t normally post work in progress stuff but this one is nearly over the line so I will make an exception. It needs some more inspiration and accessories for the base, for which a plan is forming. As such it’s going into the store room with the others until I get some Titanicus mojo back,

I wanted to try and get some dynamics into the pose. I don’t think Warlord titans readily lend themselves to this without a fair bit of modification and to get this one to work there is a fair bit of pinning to the base.

Crushed tank under foot as part of the step down

Engine on full advance. The head is custom, an amalgam of two types and I like the look that has resulted.

Base name plates from Versatile Terrain. 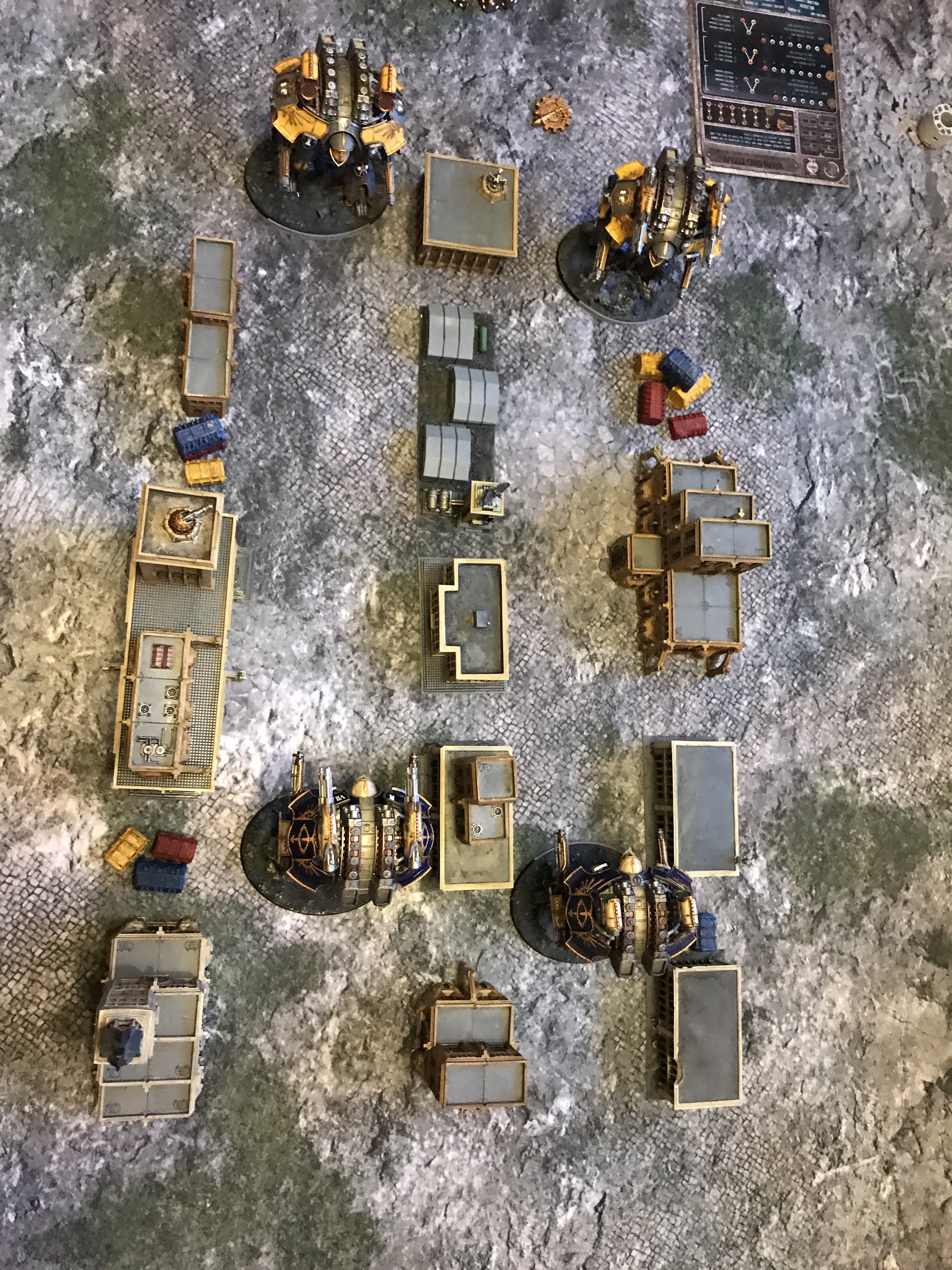 The boys wanted a quick came of Titanicus so we though down a battlemat, scattered some terrain and grabbed a pair of Warlords each.

Two avenues created gun alleys for the Titans to bombard each other as they advanced. 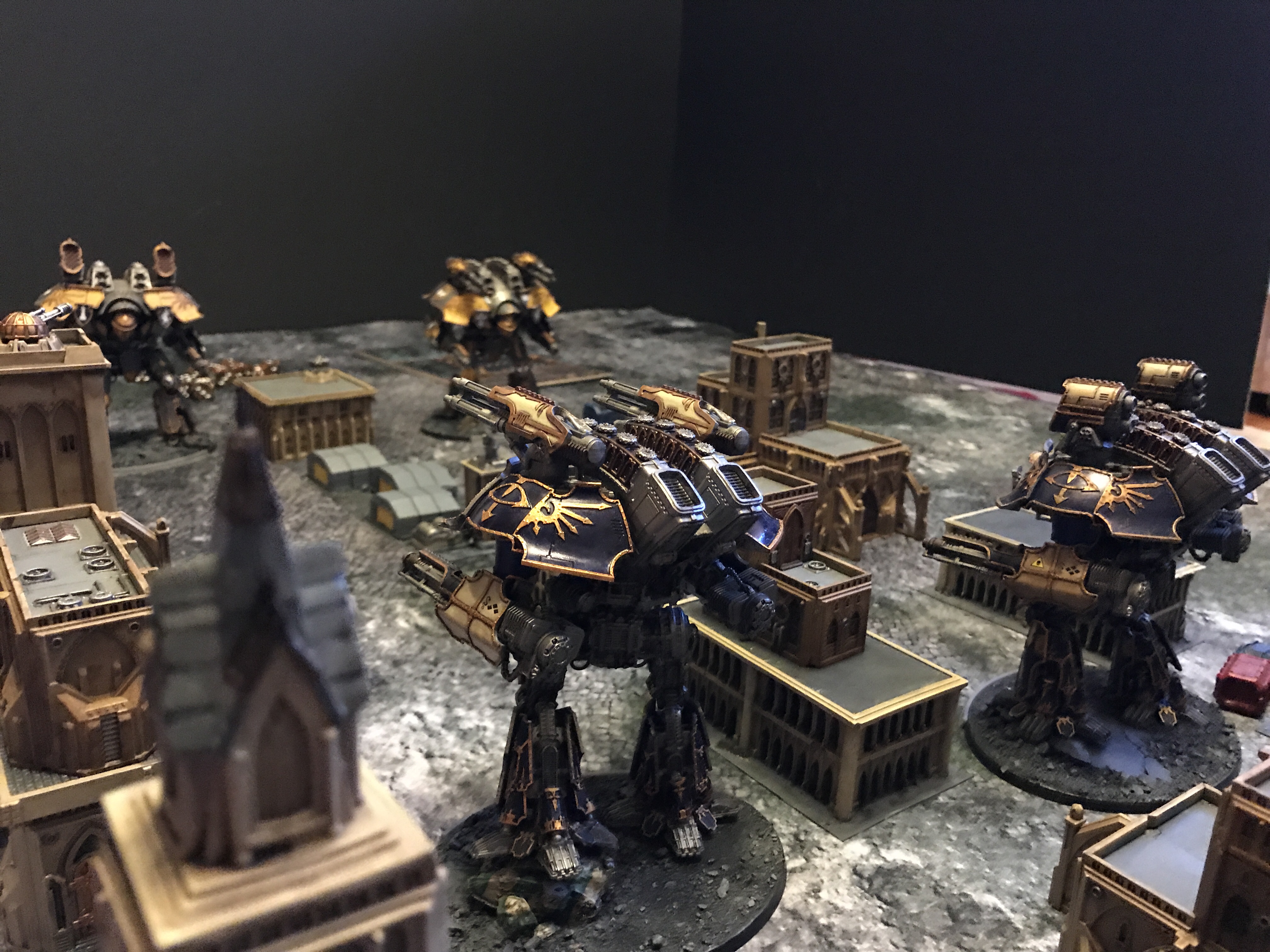 Both pairs fell into close combat, despite neither being equipped for slogging it out at close quarters.

It was another short game, so we decided to call the results on damage inflicted. 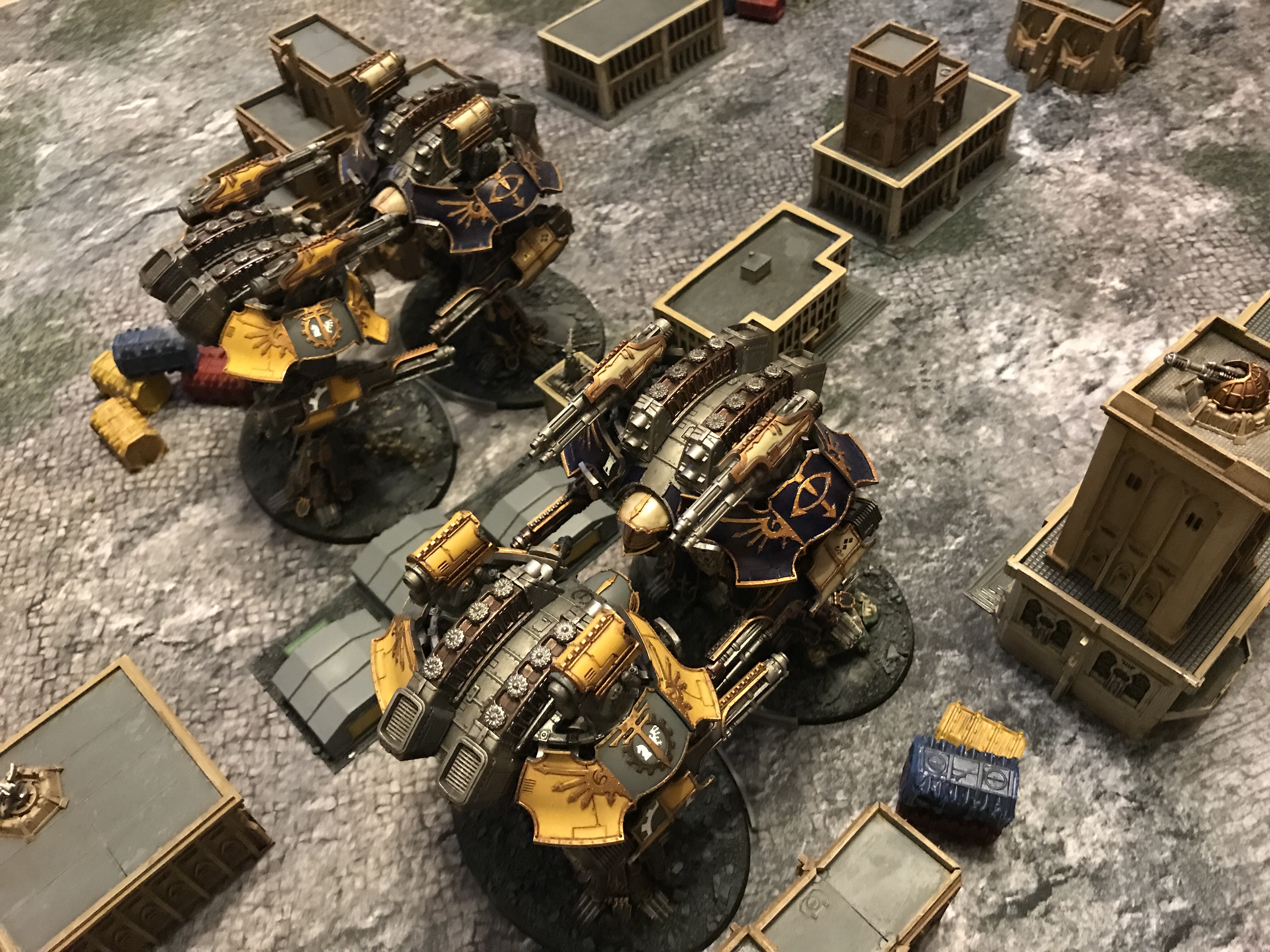 Legio Ulricon survived the onslaught with the least battle damage.

Both Gryphonnicus Warlords took critical damage and limped off to get repairs.

Gifted a new battle mat from Deepcut Studio for Christmas it was time to put it into action. I finished painting up some ruins and we organised the opposing sides into another matched play battle.

As the game started an advantage of the Dungeon theme battle mat became clear each of the squares is 1″ so the measurement ruler took a rest for most of the game. All the Reavers pushed their reactors to move into the centrefield ASAP.

Opening salvos from the Traitors attempted to take down the Reaver approaching from the Loyalist left flank but despite focused firepower from the Laser blaster equipped Warlord and the Reaver failed to make a dent with the void shields still holding after the barrage.

In contrast some effective dice rolling from the loyalist side saw the Warlord take a proper pasting, with the shields downed and some devastating hits pouring in from the Volcano cannons. On the other side of the battlefield some strong shields and poor shooting caused little damage and it was all recovered in the next repair phase.

The split into two distinct channels of fighting on the board was unexpected and seemed to make almost two separate games, but this was about to change in the next turn. 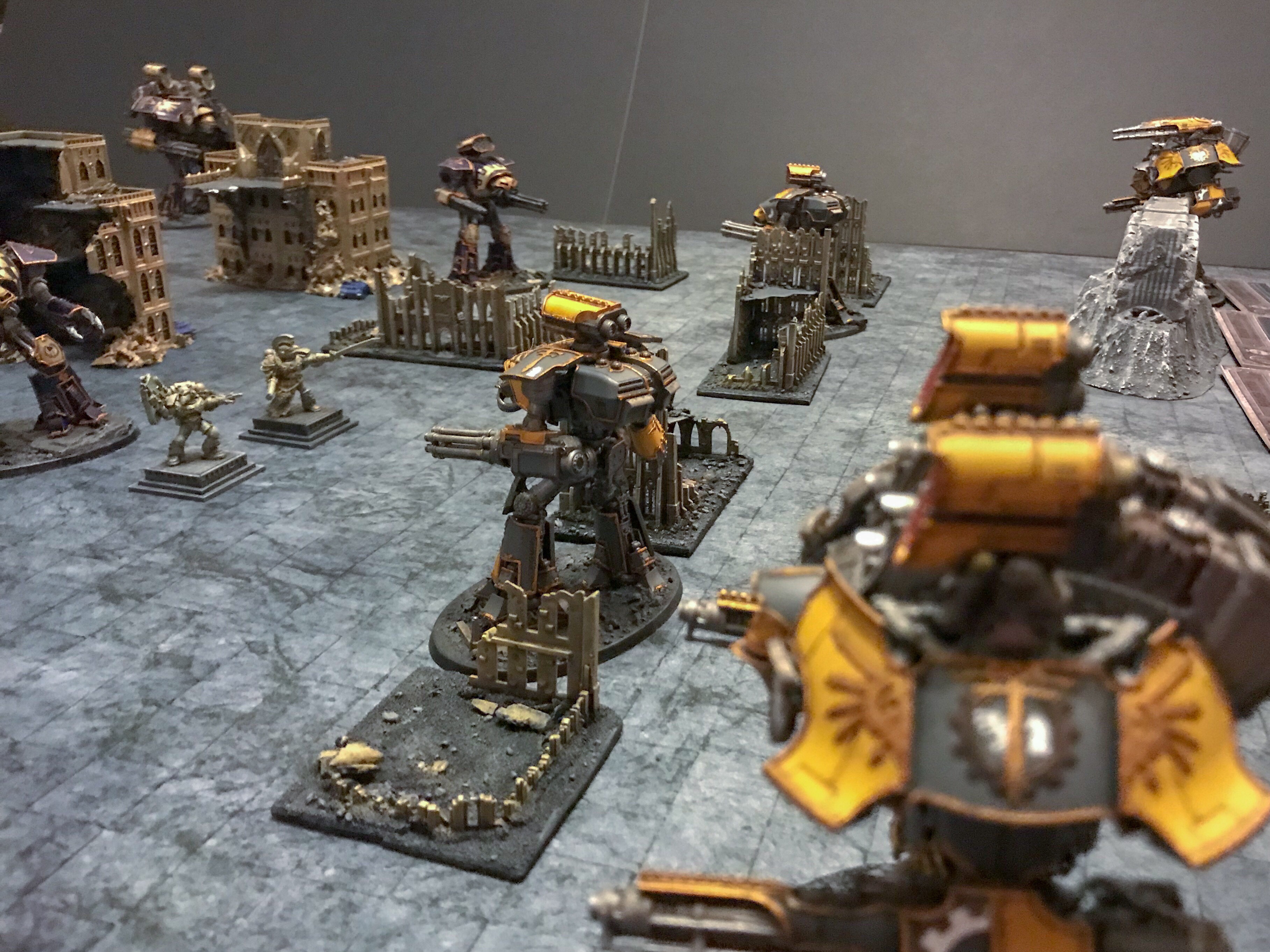 Having left one of the Traitor Warlords with no shields and a leaking reactor, the loyalist goliath turned to lay fire into the Reaver that had just entered combat.

The Reavers started tearing chunks out of one another…

…but made little in the way of damage.

The game was declared a draw after three rounds. There were no engine kills, but there was plenty of critical damage and another round could have been the deciding factor in swinging in favour of one faction.

So Winters SEO has now completed a couple of battle reps and I was taken by his first game: Knights and Warhounds in a scouting units skirmish.

I’d painted up some new terrain so we used that for this clash of the loyalist Legio Gryphonicus and House Coldshroud knights and the traitors of Legio Ulricon and House Liagaun. Two Warhounds and 6 knights apiece.

The first movement round brought both sides within firing range and all of the traitor firepower ploughed into the knights. The loyalist Warhounds being obscured by the forest.

The combined firepower reduced the loyalist knights to two within the first round of shooting. It was bad news for the goodies!

The second battle round saw the Warhounds coming face to face as they punched through the trees.

Whilst the House Liagaun knights pursued the remaining loyalists of their ilk who proved to be immensely resilient (poor dice rolls helped them).

The third round saw the focused fire power of the loyalist Warhounds destroy a Legio Ulricon god machine. The legs suffered catastrophic damage and it fell silent but did not fall.

After that kill the Warhounds advanced to despatch the baddies. This didn’t seem to go to plan…

A turn later focused firepower, targeted attacks and flanking manoeuvres took down a loyallist Warhound. The catastrophic body damage saw it turn, lay two salvos into its team mate and then fall crushing one of the knights instrumental to its toppling, a glancing blow to the team mate and on the way down it flattened some trees!

The remaining rounds failed to make a significant impact in standings and the game ended with a remaining and smouldering Warhound on each side, but three traitor knights to none. A victory was claimed as the Legio Gryphonicus Warhound remaining fled. 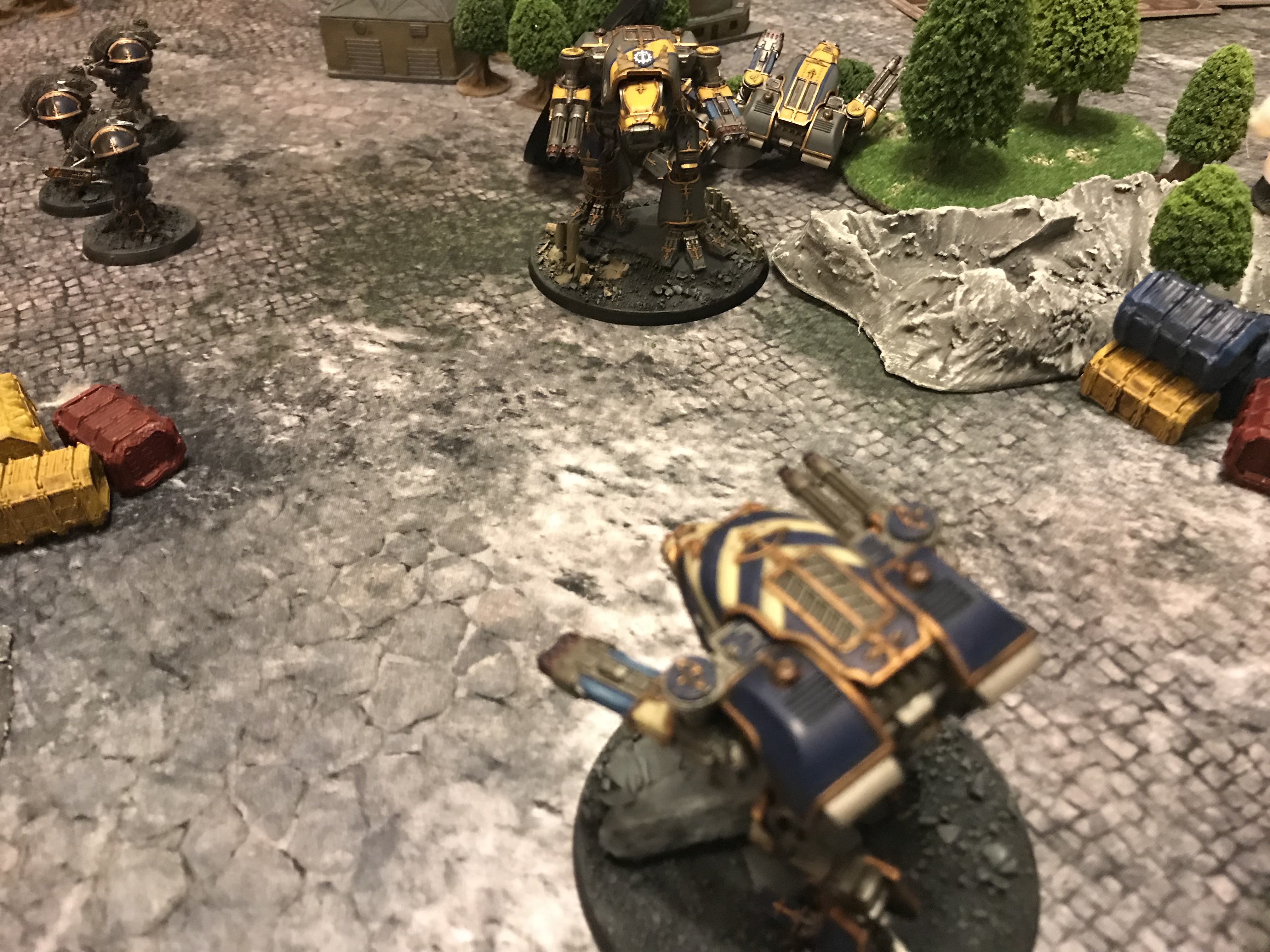 So tried another game with the boys, this time we upped the stakes with the following on each side: Warlord, Reaver, two Warhounds and half a dozen Knights.

Introduced some more new scenery and a different layout and off we went. I’ve now painted up all the markers and templates, a bit of gold on the markers makes a big difference to the readability of the command centre terminals.

The boys took Legio Gyphonicus into battle with Legio Ulricon once again. The War Gryphons moved off first moving towards the objective in the centre of the table. Yet it was the Ulricon Warhounds that closed to within 12″ of the objective. Early salvos dromnthebtraitor Warlord saw the Gryphonicus Reaver stripped of all void shields, only to recover them with a brace of 5 & 6s in damage repair.

In the second turn the War Gryphons Reaver made for the central avenue to back up a charge for the objective led by the knights and backed up by the loyalist Warhounds. Fire erupted down the Central Valley between the buildings and ion and void shields bounced nearly all of the fire back.

In the Legio Ulricon second round the pile in at the centre took on more shape as the House Liagaun knights arrived and started trading melee blows. The Ulricon Warhounds were stripped of shields and started taking weapon damage.

On the Ulricon right flank the Reaver stood it’s ground under Warlord fire and on the left the traitor Warlord volleys failed to take down the Gryphonicus Reaver but cracked the reactor housing and inflicted devastating hits to head and legs.

The game came to and end after three rounds and was declared a draw. Only one machine fell – a loyalist knight, but the scorch marks and smoke from the god machines spoke of the battle that had been fought.

With the gift of a Deepcut Studio battle mat for my Birthday it was time to take games of Adeptus Titanicus up a notch. When I played the original 30 years ago I couldn’t imagine playing go a surface like this – carpets and the original polystyrene buildings were it – we had good fun adding in books and maybe a sheet for terrain effect… So for this game we were recreating some magic.

The titans of Legio Ulricon and Legio Gryphonicus lined up once again, with the knights of House Liagaun and House Coldshroud moving at pace into the centre field. Warlords and Reavers opposed each other on the flanks and started tearing into each other.

The loyalist Reaver missile launcher stripped off the shields from the opposing Reaver a fact that would not be reciprocated and prove critical. The traitor went on to suffer critical damage that could not be returned. With a leaking reactor things weren’t looking good for the traitors. 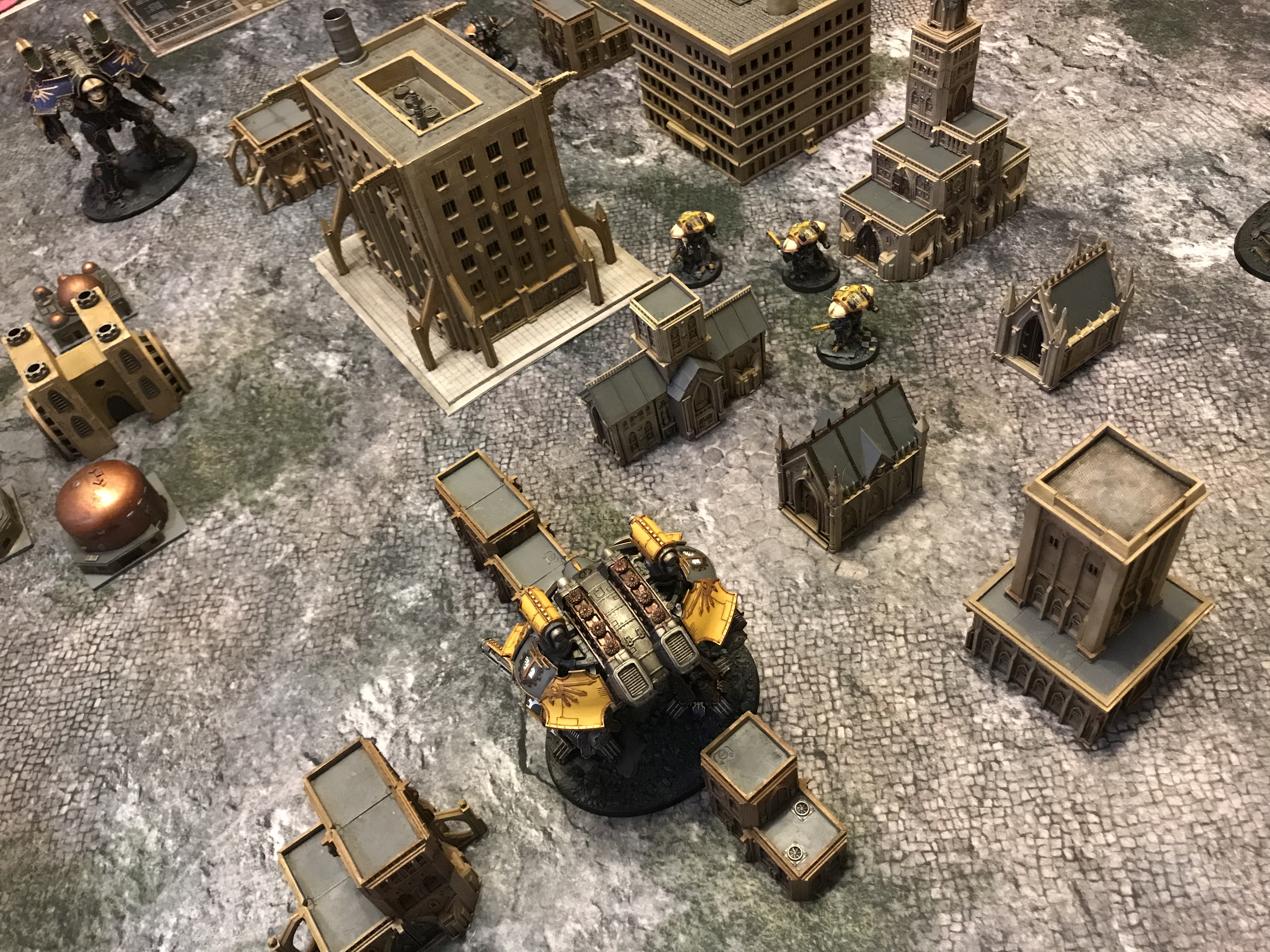 Despite the tall buildings there was no hiding the towering mass of the Warlords and they too exchanged Salvos, both losing void shields but surviving complete collapse.

The knights closed in to effective weapon range and started trading volleys down the central city valley. They never made it into close combat before the game ended prematurely and in the mean time the ion shields did a great job in protecting the Questoris. 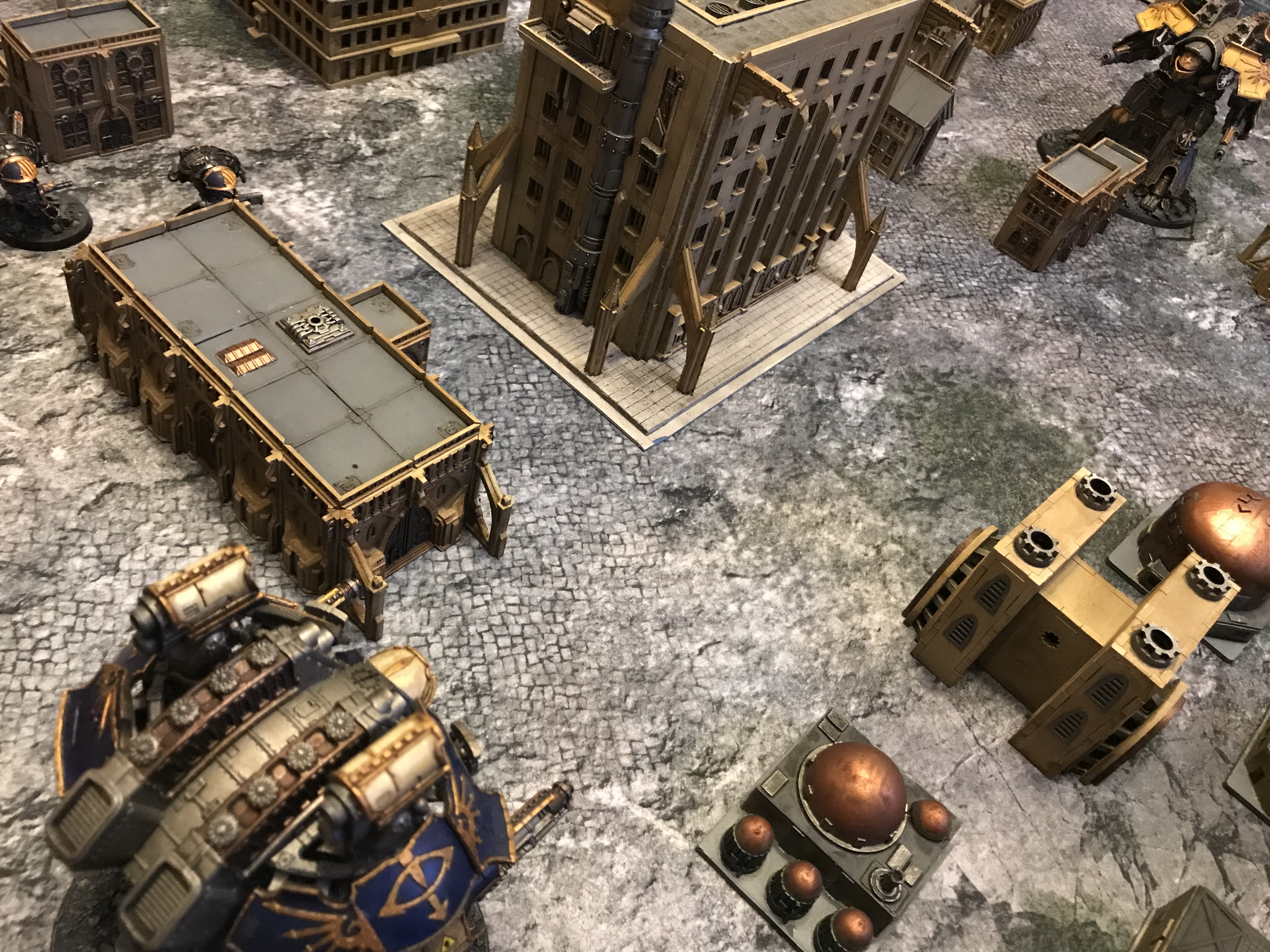 The Warlords also traded further volleys with stray rounds of volcano cannon fire turning the surround scenery to slag. The void shields however held strong. The game ended after three turns with an agreed draw. Looking forward to the next fight! 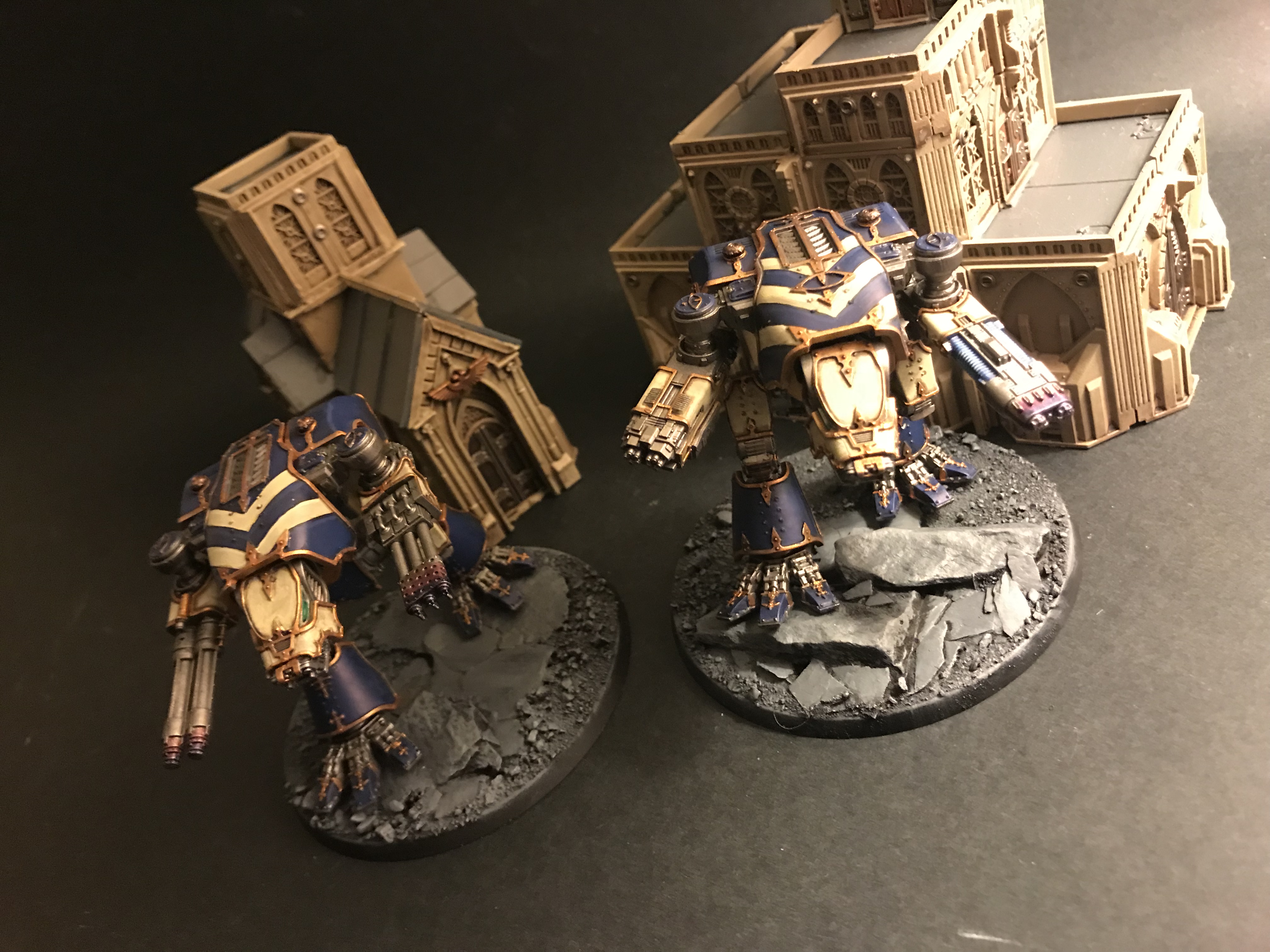 So no gaming mat but thanks to Warhammer 40k Conquest and a bit of card we have a basic gaming surface and plenty of buildings to get things underway. 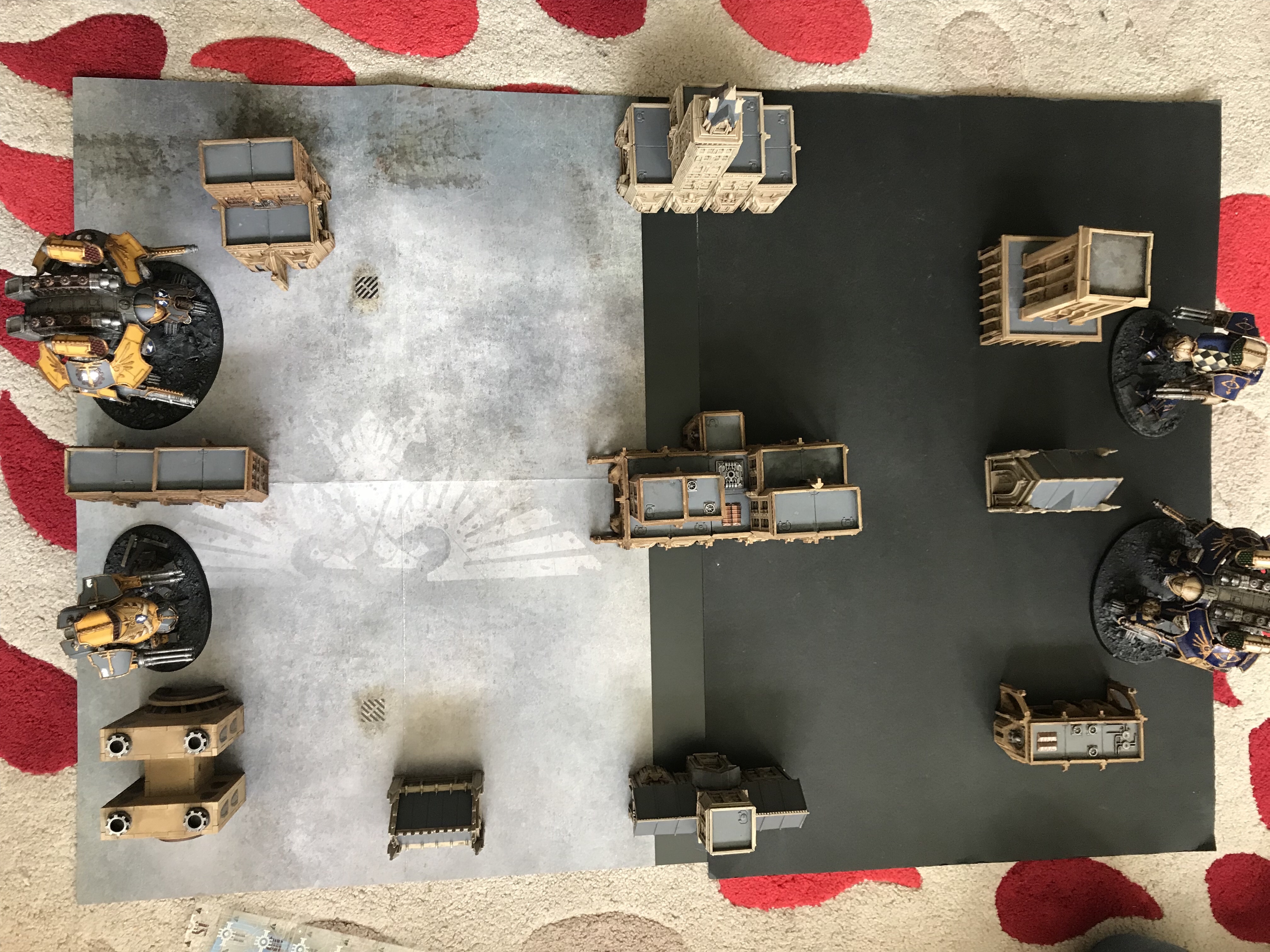 A Warlord and Reaver pairing from Legio Ulricon took on equivalent duo from Legio Gryphonicus. The small scale battle arena didn’t have a great influence on the game. It was our first go with the new rules and there was a bit of feeling out the gameplay.

There was no winner or loser in the game, but it was good fun and we’re looking forward to some more battles.