Added some paint to one of the built-but-not-painted Raptor squads. 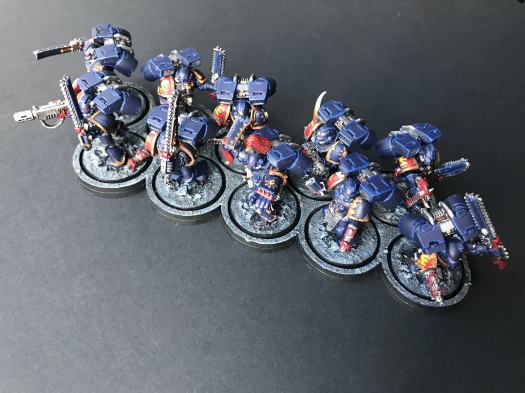 I used the red accents on the weapons with one of my Havoc units and liked it, so tried the same again here. Not sure I like it as much. They just feel quite busy.

When edge highlighting I went a shade lighter than normal and didn’t like the outcome. In the end I toned it down with a couple of basecoat washes.

Still need to do some talon equipped breatheren. Next time I do jumpy dudes it’s happening!

I’ve a backlog of raptors assembled and waiting for paint. This unit was already assembled and painted as a unit of 8, yet was in need of a refresh.

Searched the bits box for the relevant parts and assembled the two missing squad members.

When you’ve been into 40k since the game came out and your engagement with the hobby has ebbed and flowed with time, you begin to forget what you read and when and indeed whether the memory of that was something that has been warped by the passage of time. Anyway at some point back in the day, I’m fairly sure that one of the traits of the Night Lords were plenty of jump pack equipped marines.

Having been slaughtered at the hands of some jumpy Ultramarines in Games Workshop Norwich in the late 1990s it was clear that I needed some, so I’ve gradually being amassing units. One was actually painted previously, but needs an overhaul and thus those below are the first unit. Yes, another ten man squad.

These came out of a job lot of figures I acquired and were preassembled and primed in chaos black. I liked the poses and the terror squad heads so they went straight to paint, no mods.

Five of the troops are equipped with chainswords and bolt pistols. I can live with that, there’s going to be plenty of variety so I can live without chainaxes on this occasion. 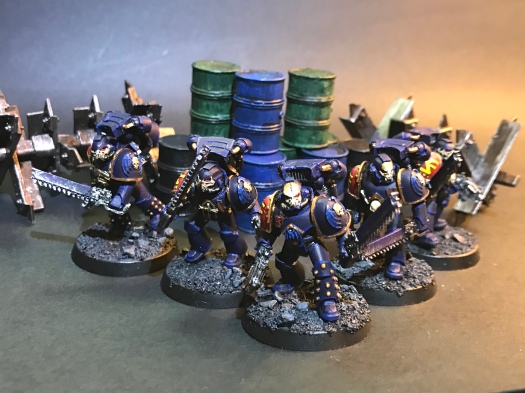 I’ve been feeling the need to have a go at weathering, so tried some on the chainsword bars. I used a dark purple and then two shades of silver. I think that the effect needs some more work, but it’s a start.

The other five troops in the unit carry power maces – not my power weapon of choice, these are not 40k monks or tech priests. That said, I will cast aside my ecclesiastical association with these weapons and hope they will be equally useful in smashing their way through armour. 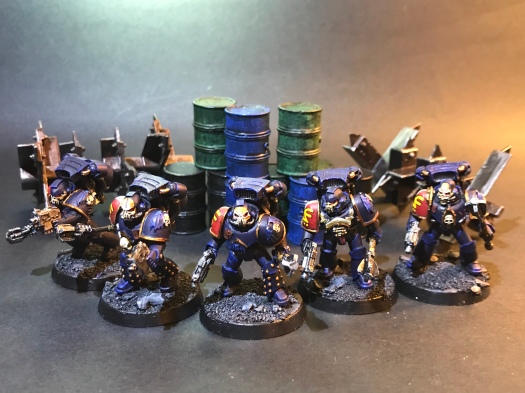