After months in storage an Instagram post by @swinter_uk inspired me to crack on with sorting out a model I wanted for many years and finally bought earlier this year, a Chair Warhound Titan. The starting point for this was to get it standing and on a base. 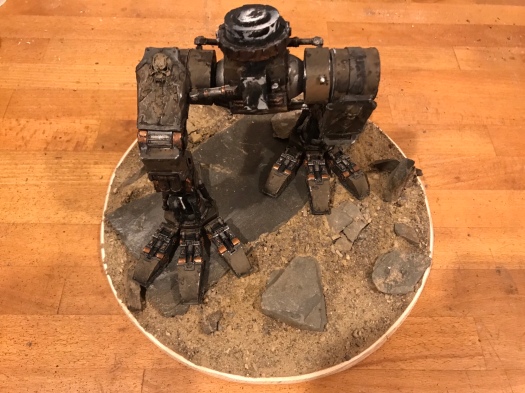 A 300mm 1/2″ plywood base was soon drilled and layered with Welsh slate (i’ve been collecting a bucket full this for the last 6 months) and greenhouse dried sharp sand (because it’s always damp in the plastic bags that come straight from the quarry).

The ply base and the large piece of slate were both drilled. The underside of the base was then recessed so the head of a 6mm bolt would sit flush. The bolt I used had the head around down to 1.5mm thickness so there wasn’t too much ply removed. This and the slate was then epoxied into place forming a peg that sticks up about 30mm. The right foot was then drilled on the pillar drill so the peg can mount into it. 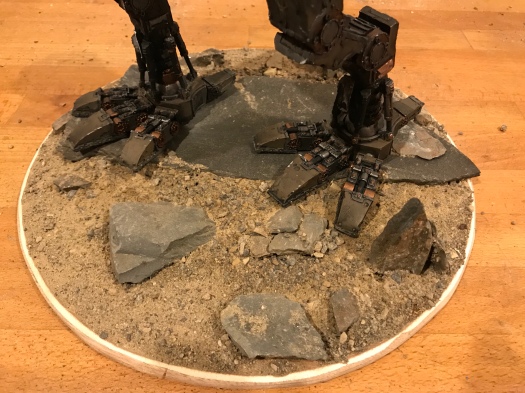 This bottom half had broken into three parts. I had adjustment on the left leg at the hip and right leg at the knee. These were manipulated to work with the terrain and then pinned with sections of stainless steel bicycle spoke and epoxied. Toe adjustment was next.  Three of the six front toes were snapped off, but non of these or the rear toes were fitted flush to the rest of the foot. the resin pegs on the back of the toes had been slotted into the foot but left a 5mm gap. So they all got chopped off and it was time to pin and epoxy to make things right.

Adjusted a few of then toe sections before pinning and glueing by snapping the original glue (fortunately not the resin) and then repositioning to work with the terrain.